The picturesque island of Ugljan is not far from Zadar and can be reached by a quick and cheap ferry. Ugljan Island is often called the green island because it is filled with beautiful dense bush, pine trees, olive trees and vineyards. On the north side of the island is where tourists will spend most of their time in towns called Kukljica, Preko, Ugljan and Kali. The other side of the island is mostly uninhabited.

We took the Jadrolinija ferry from Zadar and spent just the day on Ugljan Island, it honestly was one of the best days I have had while travelling. We had so much fun cruising around on hired scooters and checking out the clear blue beaches. It was also a pretty affordable day out, it was roughly $40 Euro to hire the scooter for half a day and the food and drinks on the Island are reasonably priced (you will find scooter hire shops as soon as you get off the ferry at Preko). I would definitely recommend exploring this Island if you are near Zadar in Croatia. Check out our video below:

And here’s some photos around Ugljan Island: 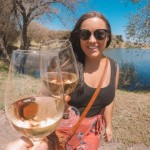